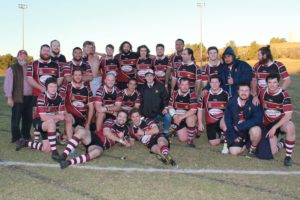 “It’s not all about winning; it’s about turning up, and trying your best. It’s about mates and friendship.”

This philosophy has seen the Parkes Boars Rugby Union Club endure through generations.

The Boars celebrated their 50th Anniversary with a gala dinner at the Parkes Ser- vices Club last weekend. Mayor Ken Keith officially welcomed the 185 strong crowd, which was made up of team mates young and old, as well as partners, families and supporters. Geoff Rice emceed the event, and called on former players to share their (sometimes dubious) memories of their glory days.

Special guests, former Wallaby Jon White and current Wallaby Tom Robertson helped celebrate the golden milestone. Both have a connection to the region, and an enviable career in rugby union.

Jon, who grew-up in Yeoval, agreed that country rugby punches above its weight. “There used to be pathways there for country boys,” he said, “but now country boys have to play in the cities to be seen by selectors. It really is a retrograde step.”

Tom was born in Wellington, and deferred his medical studies to focus on football. “People talk about overnight success,” he said, “but they don’t see the hours and hours of training that you put into it and all of the sacrifices that you make.”

The evening was a jovial celebration of the kind of mateship that the club has shared for the past 50 years, confirming that, for the Boars, it is more than just football.