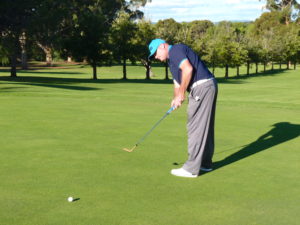 Chasing the leading duo is John Green with 11 shots adrift on 153, and Joey Van Opynen in fourth position on 155.

Peter Bristol leads the B Grade after rounds of 89 and 83. Last year’s runner- up Michael Smith is three shots back after rounds of 87 and 88, while pre-championship favourite Dub Rodgers is only 4 shots off the pace with Dave Whitfield.

Veteran golfer and one of Parkes’s favourite sporting identities, Laurie Wake- field shares the lead in C Grade with Duncan Constable after both players recorded 179 shots.

Veteran golfer and defending veterans titleholder Robert Hey has a comfortable 10 shot lead over Ian Phipps in that divi- sion, while Lachie Buesnell is a comfort- able leader in the junior section.

In the overall handicap division only a handful of shots separates the leading ten players with Duncan Constable currently leading a frenzied pack of chasers on 139 just 1 shot clear of Tim Lasserre and Pe- ter Bristol, while Phil Bishop and Laurie Wakefield are just one shot further back on 141.

The final two rounds will be played this weekend with players also vying for the eight positions in the respective three grades of the club’s matchplay champion- ships to be played in conjunction with Saturday’s third round.