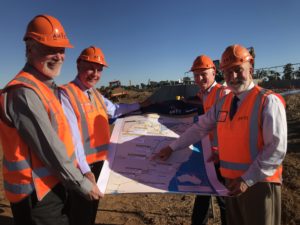 The upgrade work will support ongoing delivery of Inland Rail when construction begins on the project’s Parkes to Narromine section in the middle of this year. According to the Managing Director ARTC took advantage of planned operational rail line shutdowns to build four new concrete bridges to replace four timber top bridges that have reached their end of operational life.

“The concrete bridges are stronger to support the longer, heavier and more efficient trains that will carry the lion’s share of domestic freight between Melbourne and Brisbane. “The Inland Rail standard allows for a significant increase in axle loads, which means regional producers can get more of their payload on each train. One 1.8km long train with ‘double stacked’ container capacity will support the movement of about 2,500 tonnes of freight in a single trip, which will slash freight costs by around 30% compared to road.”