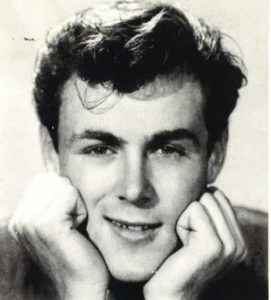 Australia’s James Dean, the late Dig Richards, will be inducted onto the The Wall Of Fame at the 25th Parkes Elvis Festival. The induction on Wednesday, 11th January 2017 at 2pm will be followed by The Wall of Fame Show in honour of Dig at the Parkes Services Club at 4pm. Fellow Wall of Famers Rob E.G., Little Pattie and Lucky Starr will perform. Dig’s brother Doug Richards, who played with Rob E.G. and Lucky Starr and lives in Parkes these days, will also play, as well as Leon Isackson, who used to be the drummer in Dig’s band.

The tribute show will focus on music of Dig’s era and include the two hit songs Doug wrote for his brother. Dig, who was born in Dunedoo, was one of Australia’s first wave of Rock ‘n Rollers, and one of the Top Five Australian Rock Superstars of the 1958/59 era with Johnny O’Keefe, Col Joye and Joynny Devlin, who have all been inducted onto the Wall of Fame. Rob E.G. and Lucky Starr followed Dig on to Bandstand and Six O’Clock Rock in 1959, and Little Pattie joined them in the early 60’s, each of them soon becoming members of Australia’s elite Top 10 recording artists and TV perfomers. Rob E.G., also known as Robie Porter, toured with Dig in those years and became very close friends with him. Robie became a hit record artist in the early 60s and thenmoved on to Australia’s all-time Number 1 hit maker producing artists like Daddy Cool, Marcia Hines, Air Supply, Rick Springfield and Tommy Emmanuel.

Robie reminisced about his time with Dig telling The Parkes Phoenix: “Dig was one of the best in show business I have ever met. He was first class.” He said many people had unfortunately forgotten about him because he died at the young age of 42. Dig, Rob and Lucky toured Australia many times together with The Delltones, and Robie felt it was very appropriate for them to play together in this tribute in honour of their great mate, Dig.
By Maggi Barnard