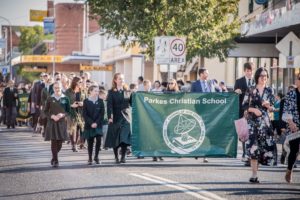 The Parkes community flocked in huge numbers to the Anzac Day events in Parkes last week making it the biggest attendance yet. Parkes RSL Sub Branch secretary Paul Thomas said it was the biggest attendance he had seen and was full of praise for the hundreds of people attending the dawn service, the Anzac Day march and the civic ceremony in Cooke Park.

He was particularly happy with the representation by all the schools in town at the march. The Parkes RSL Sub Branch also unveiled two memorials dedicated to two Parkes men who served in World War II on Anzac Day.

The memorials at the Parkes Services Club, were of Victoria Cross recipient Flight Sergeant Rawdon Hume Middleton and first Corporal, then Flying Officer Colin Francis Hendry. The unveiling was done by former Parkes resident and one of Australia’s most senior officers in the Royal Australian Air Force, Air Vice-Marshal Stephen Osborne.