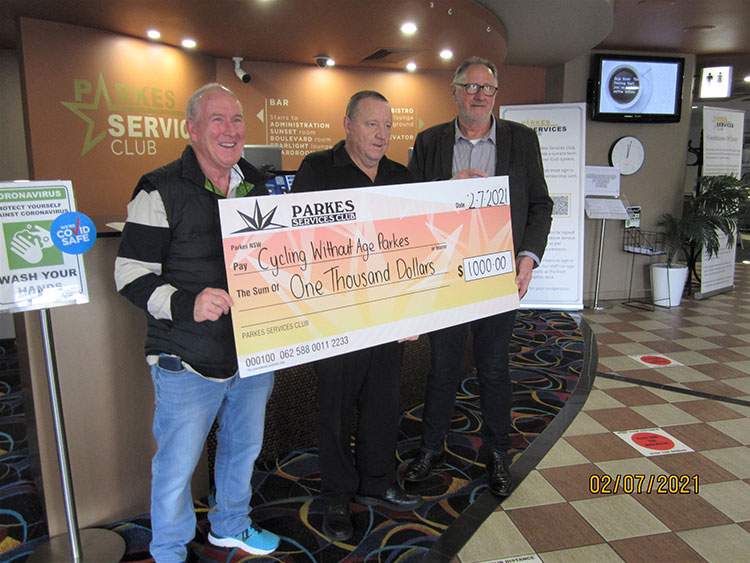 The Cycling Without Age – Parkes campaign received a major boost last week when the Parkes Services Club donated $1,000 to the committee.

“This puts us more than halfway to having a trishaw in Parkes permanently and giving those in the nursing homes of Parkes something to look forward to on a regular basis,” said Warren Edwards, grants, donations and sponsorships officer.

“The Trishaw for Parkes committee would like to thank the Parkes Services Club board for their donation.”

Warren also thanked the local community for their fantastic support and encouragement. “Most of our donations are coming from the local Parkes community.” He said a lot of the over $12, 500 raised so far had been ‘off the street’ donations when committee member Peter Guppy had been doing the rounds with his donation bucket.

He encouraged members of the public to support the campaign. “For as little as $5 you can help the trishaw become a reality in Parkes.” Go to https://chuffed.org/project/cycling-without-age-parkes… to do your bit.

The trishaw is a light three-wheeled motorised tricycle with a basket in the front designed to transport two passengers.

“Essentially the trishaw is an electrically assisted bike, so it’s fairly easy to ride,” Peter Guppy told the ABC in an interview. “They were first developed in Denmark and quickly spread around the world.”

Earlier this year Parkes became the latest member of the international movement Cycling Without Age, a program that promotes social inclusion for people facing increasing immobility.

Australia currently has over 60 Cycling Without Age affiliates in approximately 35 chapter locations, with Parkes taking that number to 36.

Peter has brought a trishaw to Parkes on two occasions so far this year to give the community, and especially residents of nursing homes, an opportunity to get some fresh air and feel the wind in their hair again.