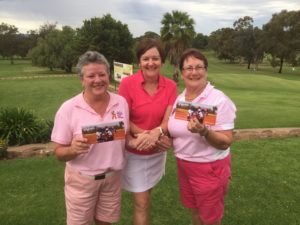 Parkes golfers were out in force last Saturday, wearing pink in support of breast cancer awareness. With the help of Jane McGlashan selling pink cupcakes and raffle tickets, and under the guidance of Leone Stevenson, Parkes golfers raised $1,100. Playing a stableford sponsored by Totally Workwear, Trevor Chatman took out the men’s competition by two points, scoring a blistering 44 points.

Denis Howard and Ron Hetherington were next best with 42 points apiece, followed by Brett Cowling and Charlie Allen who both scored 41 points. Riall Harrison and Wayne Parker both scored 39 points to lead home a group of
players on 38.

In the women’s competition Colleen Flynn and Cathy Kelly claimed top spot comfortably winning by five shots over Kaye Jones and Lynne Guise – 67.25 to 72.25. Next best were Frankie Cock and Margaret Hogan on 76.5, followed by Colleen Staples and Lyn Davison with 78.125.