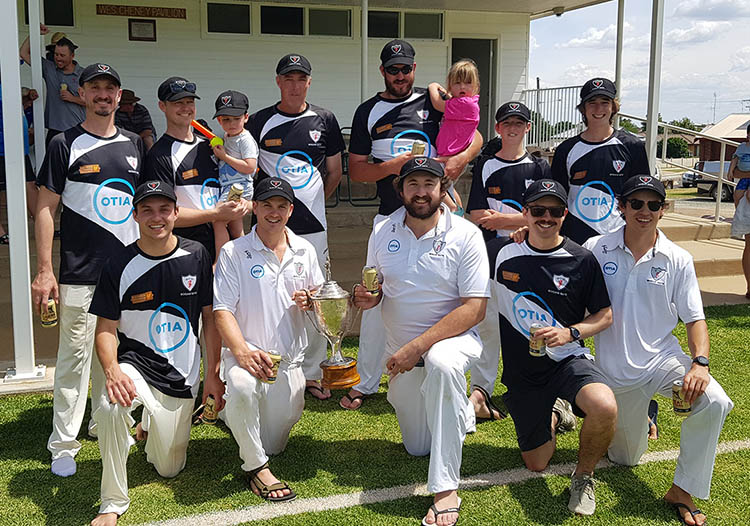 The 101st year of the prestigious Grinsted Cup delivered another amazing chronicle on Sunday when Bogan Gate produced a Cinderella win in their first appearance in 85 years!

The Bogan Gate Rabbits last held the Cup in February 1936 when they defeated arch-rivals Forbes in a thrilling contest, while Parkes was aiming for their 14th consecutive challenge victory.

The Woodward Oval provided the ideal setting as spectators came from across the state to witness the history-making clash.

Parkes won the toss and elected to bat. They immediately faced some excellent bowling from former Western Zone representative players Phill Dunford and Andrew Britt. Parkes soon reeled at 2/13 after 6 overs with Phil claiming the prized scalp of Parkes captain Myles Smith, who departed without troubling the scorers.

The introduction of Craig O’Shannessy and Ryan Dunford delivered immediate re-ward for Bogan Gate. Craig captured 2/19 off 5 overs, while Ryan finished with 2/16 off 7 overs. Parkes struggled to gain any momentum as the score stood at 7/37 before a valuable late order partnership between Jock Yelland (17) and Blake Smith (16) helped boost the Parkes total to 80 runs off 37.4 overs.

Andrew Britt turned in a superb spell of bowling to finish with 3/31 off 17.4 overs including six maidens, while Phil Dunford collected 3/13 off 8 overs.

In reply, the Bogan Gate opening pair of Lachlan Britt and Paul Dunford were in great form. Paul retired hurt on 14 after suffering a nasty shoulder injury. Talented cricketer, Vince Umbers joined Lachlan to continue the impressive batting performance before Lachlan was bowled by Blake Smith (3/21 off 6.1) for 28.