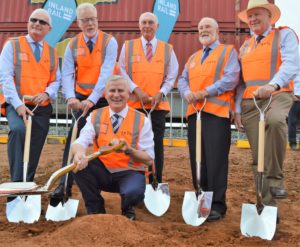 Parkes is used to doing things on a large scale, but last Thursday a new chapter of once-in-a-generation proportions started as the first sod was turned to mark a historic moment for the construction of the multibillion dollar Inland Rail project.

“The project is bigger than Elvis, even in Parkes,” said Prime Minister Scott Morrison on video before the large gathering of over 200 people stepped outside where the first 5.3km of new rail for Inland Rail will be built.

A double-stacked freight train came around the bend near the intersection of Coopers Road and Brolgan Road, and local Nelungaloo farmer and owner of adjacent land, Warren Skinner, stepped from the train to hand a 106-year-old shovel to Deputy Prime Minister Michael McCormack.

“A fantastic event for the heart of Australia and Australian rail. This day will be looked back on as a momentous occasion. The first 600 tonnes of steel have been delivered, using Australian steel from Whyalla. Nothing this large ever happens easy,” said the Deputy Prime Minister.

In addition to the 5.3km of new rail, another 98km of existing corridors will be upgraded between Parkes to Narromine for the first phase. “When Inland Rail is operational, Parkes will be an important hub with double stacked, 1,800 metre trains connecting west to Perth and Adelaide and along the east coast between Melbourne and Brisbane,” said ARTC CEO John Fullerton.

Inland Rail CEO Richard Wankmuller said a resilient rail network would be built, with multiple pathways to meet the needs of customers while also providing flexibility for farmers by connecting to existing regional freight lines.

As for the economic benefits of the project, ARTC Chairman Warren Truss highlighted the fact that Inland Rail would generate opportunities and benefits to the regions – 16,000 jobs and $16 billion dollars to the economy and will stimulate business activity beyond the construction phase.

In Parkes several businesses have already started reaping benefits with the awarding of the $310 million contract for the first leg of Inland Rail between Parkes and Narromine to INLink Joint Venture.

“We are shopping local and have already spent over $120,000 across local businesses in Parkes, including Sullivan’s Mining and Hardware, Totally Workwear, Hays Hardware, Andrews Auto Electric, Signs You See and Regional Business Supplies,” said Project Director Gerard O’Connor. He said the project would also provide close to 100 job opportunities for local residents.

“We believe it is important to work closely with local communities along the alignment, and we have already made a start by engaging with local sports teams and educational institutions.”

By Beth Thomas and Maggi Barnard