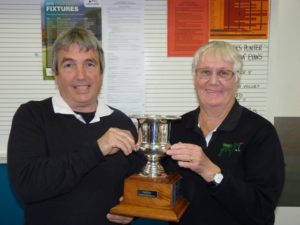 The dominance of champion ladies golfer Lynne Guise continued last Sunday when she and partner Robert Hey regained their mantle as the clubs premier Mixed Foursomes champions with a decisive two shot win. Guise, who has partnered with six different players in an 18-year reign, has won the title nine times.

In Sunday’s 27-hole Championship event Lynne and Robert recorded 124 to finish two shots clear of Joey Van Opynen and Cherrie Phillips. Defending titleholders Ian Phipps and Kaye Jones were a further three shots back after gaining the minor placing on a countback from Cameron Butler and Colleen Staples finishing on 129.

In the Consolation Division it was the junior combination of Lachlan Buesnell and Kasey Fay-Rice who held off club captain Paul Thomas and Liz Matthews in a tight finish that saw the victors finish on 145 with just one shot clear. Richard Hutchison and Barbara Donnelly were relegated to third position seven shots behind the winners.

In the Liz Matthews-sponsored Handicap sections, Cameron Butler and Colleen Staples took out the A Division on 108.75 nett with Robert Hey and Lynne Guise in the runner-up position on 110.5. Paul Thomas and Liz Matthews reversed the result when they took out the Consolation Division on 113.75 some 2 shots clear of Lachlan Buesnell and Kasey Fay-Rice.

In other golf results Cameron Butler took out the Peter Dixon, Mark Kelly and John Green-sponsored 18-hole Stableford competition played under Joker conditions last Saturday. He recorded a great 39 points plus 15 Joker points to finish on 54 points,while Tony Evans was awarded the best score under normal playing conditions
with 39 points on a countback from Wayne Parker and Ian Phipps. In the Ladies competition Cherrie Phillips won on 46 points in the Denise Charlton sponsored Stableford competition. This weekend the ladies will play the 5th Golf NSW Medal and Club Medal with the Parkes Golf Shop sponsoring the 18-hole Stroke competition, while the Men will contest the Telescope Tyres & Batteries August Monthly Medal.

On Sunday it’s the annual Parkes branch of Prostate Cancer and Awareness Charity Golf Day with a 4 Person Ambrose with Northparkes Mines, Central West Credit Union and 2PK & Rock FM as the sponsors for the day.