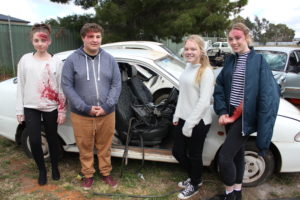 More than 500 high school students were emotionally challenged with the realities of what happens in a serious car crash during the staging of a mock crash at the PCYC Parkes last week. “I am still shaken by it,” said Kian Schembri,
a Year 10 student from Parkes Christian School of the annual event staged for the ninth time this year.

The aim of the confronting mock crash is to bring home the message of drinking and driving. The demonstration by the Parkes, Forbes and Lachlan Shire Councils is the corner stone of the NOT A STATISTIC! Youth Driver Education Program.

Four youth actors, Krystle-Lee McMurray and Maddison Collits from Forbes and Jack McGrath and Faith Hanstock from Parkes, took the audience on a moving, tragic and at times upsetting ride from a care free birthday party to the horrors of a car crash and its long-term after effects. “It is a really good way to teach us a lesson,” said Wally Campbell from Forbes High School, one of seven high schools attending.

“It will remain with me as a reminder not to drink and drive, and to think before getting into a car with someone who’s been drinking.” For Ella Richards from Parkes Christian School it was “really good and very confronting” as she has friends who had been in a crash. “I will definitely not drink and drive.” Melanie Suitor, Parkes, Forbes and Lachlan Shire Councils’ Road Safety and Injury Prevention Officer, said it was hard to gauge the effect of the annual event, but in the Central West 25% of accidents involved young people, while the state average was 32%.

Local young drivers were involved in 207 crashes across the Parkes, Forbes and Lachlan Shire Council areas over four years from 2011, resulting in three fatalities and 228 injuries.