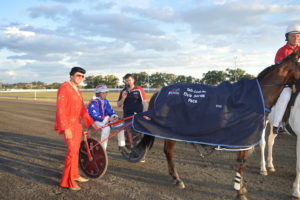 Elvis might have been a race car driver in Viva Las Vegas, but last Wednesday the Parkes Harness Racing Club Elvis event drew a crowd of almost 700 people all dressed up in their best Elvis costumes.

“We are very pleased with the attendance,” said Tony Dumesny, Secretary of the club.

The event featured eight races with the feature race the TAB.com.au Elvis Series Final. The race was won by Amanda Turnbull on Greengold, a horse she has trained. Amanda won four races on the night with her cousins Nathan and Emma Turnbull winning two and one respectively. Emma drove a local horse trained in Forbes and owned in Trundle. Bernie Hewitt from Bathurst took out the other race on the night.

There was great live entertainment by Rick Charles as Elvis, and spectators came dressed in their Elvis best. The photo booth proved very popular. Linda Taylor from Parkes was the winner of the lucky gate prize – a travel voucher valued at $4,000. Many people attended for the first time, even though they had been coming to Parkes for many years to attend the Festival.

The Parkes Harness Racing Club New Year’s Eve meet was also well attended with eight races on the program, and great fireworks at the end.

The next race meeting will be on Australia Day on 26th January with an eight- race program from 6pm. The feature race is the Joe Dumesny Memorial Race with prize money of $3,500 and a trophy valued at $500. The Keith Thompson Memorial race will also take place. One of the main attractions of the day is the famous yabby races for the kids held in conjunction with Parkes Shire Council with many prizes to be won. There will also be a jumping castle and face painting for the kids.