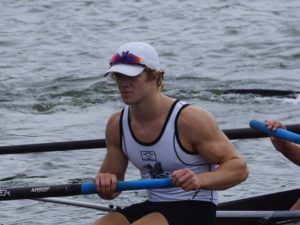 A 16-year-old Condobolin boy has been selected to represent Australia at the World Junior Rowing Championships in Lithuania in August.

Harry is the son of Bernadette and Phillip Crouch and grandson to Julie Harris of the Southern Cross Village in Parkes.

Harry will row in the two seat of the under 19 men’s quad scull with three Year 12 rowers from Sydney.

Harry competed at the Sydney International Regatta Centre achieving a personal best time in a 2k erg test of 6 minutes 15 seconds. This placed him third overall on weight-adjusted ranking out of more than 80 rowers from all over Australia. He then went through a series of sculling races, in which he ended up ranked 4th overall in a very high quality field. This ranking helped Harry to be placed in a strong crew for the remainder of the trials.

To make this feat more remarkable, Harry had to train on his own before the trials when he went home to Condobolin for the holidays. He had to travel considerable distances in order to row each day. Long rows were done at Lake Cargelligo and shorter rows at Gum Bend Lake or on Bundaburah Creek near Forbes. Harry moved to Newington College in Sydney last year to chase his dreams to row for his country.

Harry’s uncle in Forbes, Wilbur Harris is selling $100 tickets at Parkes Mensland to help support him.