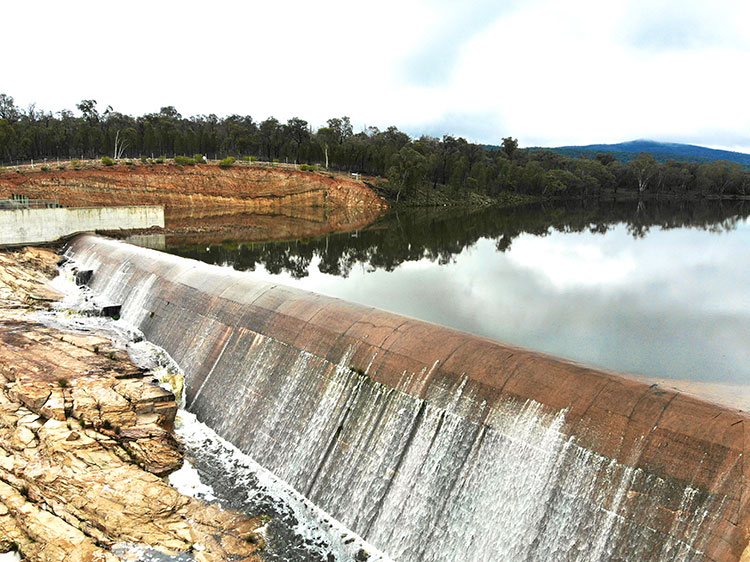 BEAUTIFUL… For the first time in four years Lake Endeavour filled up to capacity and water started running over the spillway on Monday morning. (Photo: Bill Thomas)

The water at Lake Endeavour started running over the spillway on Monday morning for the first time in four years signalling a final break from the worst ever drought in the region.

Good rainfall over the past four months saw the lake going from a mere 10% of capacity in late March to reaching 100% on Monday.

Parkes recorded a record 154.8mm of rain in April this year compared to no rain at all in April 2019. So far this year, a total of 486.8mm of rain has been recorded, which is more than double the total for the whole of last year of 229.8mm.

According to the latest Seasonal Conditions Update map of the NSW Department of Primary Industries some of the hardest hit areas in the Central West, including Parkes, Forbes, Condobolin and West Wyalong, have been classified as no longer being in drought.

But while conditions are improving in most regions, 86% of the state is still in some form of drought according to the map.

In Parkes there is one team who was overwhelmed on Monday. Witnessing the Lake Endeavour spillway turning into a beautiful waterfall, was Bill Thomas. As president of the Parkes Dragon Boat Club he and his team members despondently watched the lake level drop every week at their training sessions over the past two years. 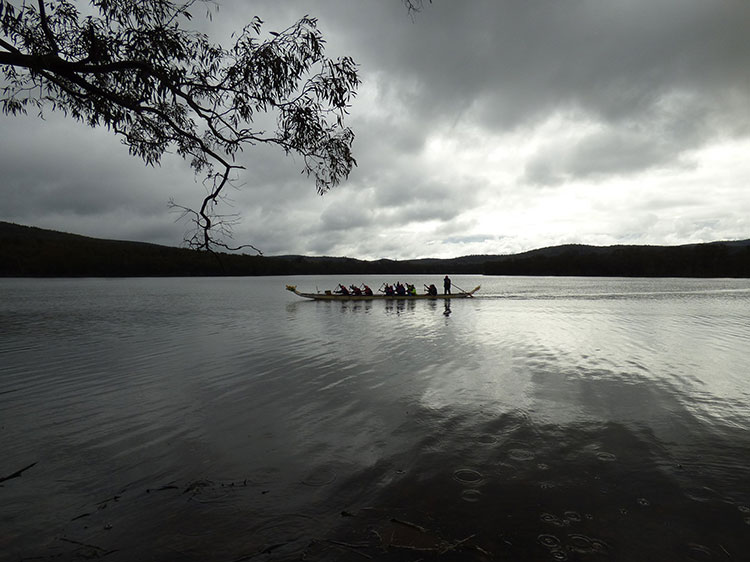 The Parkes Dragon Boat Club members love hav- ing so much water to paddle on again after seeing the lake level drop every week for the past two years. (Photo: Ian Griffey)

When training stopped in March with the COVID-19 lockdown there was not much room left for paddling. As the rain started falling, Bill begun monitoring the inflow with eagle eyes on Council’s website.

“To see the water flowing over the spillway and cascading down the rocky slope will be a treasured memory for me after seeing a dry creek bed for over two years,” he said.

“Having this magnificent lake at capacity is a wonderful feeling for the Parkes Dragon Boat Club, but more importantly it will bring to life the waterway with the habitation of so many birds and wildlife. The lake has become a special place for our members and it is so good to be back both on and off the water after months of shutdown.” He said the club members had a great respect for the lake as it is a reservoir for the town water supply.

Director Infrastructure at Parkes Shire Council, Andrew Francis said when the lake was full it significantly improved water security for the Shire. “Lake Endeavour is an integral part of the Parkes Shire’s water supply reserve. After two years without dam water availability, we will now head into the peak summer period with adequate supply.”

He said though that water restrictions would remain at Level 2. “Council will continue to monitor the situation as we approach the warmer months, the peak water supply period.”

As for the quality of our drinking water, Andrew said while the new state-of-the- art Water Treatment Plant used the latest technologies for water production and water quality monitoring, the use of dam water (rather than bore water) does result in ‘softer’ water. “Some users find this more desirable.”