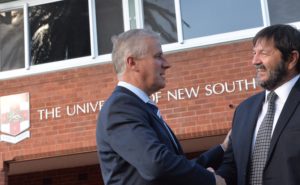 Plans to build a rural medical school in Wagga Wagga have been welcomed by students and practitioners. Sam Roberts is a final year medical student at the University of NSW’s Wagga Wagga campus and applauded the move, saying it would open up opportunities for students unable to live and study in metropolitan centres.

“The medical school will allow students to study closer to home where they have support,” he said.

“We are all excited about not only what a dedicated medical school in Wagga Wagga will deliver for this region but also about what the wider network will mean for improved health services in rural and regional NSW and Victoria,” said Michael.

“Evidence shows newly-graduated doctors are most likely to choose to live and work in rural areas if they and/or their partner have a rural origin, and also if they have spent a considerable amount of their training time in regional and rural areas.”

“I think the Federal Government has developed an elegant solution in putting together a network of five rural medical schools,” he said. “By having five schools instead of just one they are not overburdening one individual city.”