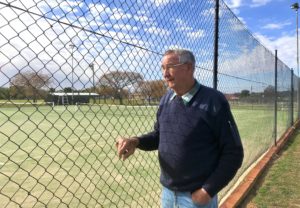 A life-long resident of Parkes has been listed in the final four nominees for the Tennis NSW Volunteer Achievement Awards to be held at the Sydney Cricket Ground (SCG) on 25th October.

For 40 years Hedley Nicholson OAM has been at the Parkes courts every week, though his daughter Helen Magill says: “Mum (Pauline Nicholson) would tell you it’s been every day!”

When asked what motivated him to take on the maintenance for 15 courts he simply said: “The complex needed repair and someone had to do it.”

Hedley recalled the days before synthetic courts when the surface was ant-bed – granite that needed to be sieved with a shovel and barrow, spread out and forever needed patching.

In 1985 the club had enough money to cover four courts in synthetic. These days the entire complex is synthetic, but Hedley continues to work on more improvements.

Every time he gets there he finds something that needs doing, as more than 300 kids use the complex every week.

Hedley’s passion for Parkes tennis was recognised a few years ago when he was awarded the OAM and the Parkes courts were lauded as one of the best country complexes in Australia. It was due to his passion that the Australian Junior Tournament was brought to Parkes.

The ultimate satisfaction for Hedley is seeing the entire block full of kids playing – not just on the courts, but playing cricket or football on the adjoining oval as well.

While Hedley says it is lovely to be nominated for the award, he is modest about his achievements. “It’s just a passion for something that I like to do.” Hedley has found a couple of good men, Brendan Hunt and Garry Barton, to help
with maintenance. Will they take over when Hedley retires? “They’ll probably be too old by then,” was his reply.