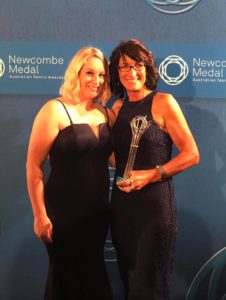 Parkes local and tennis stalwart Helen Magill won a prestigious award at the Australian Tennis Awards in Melbourne on Monday night. Helen, who runs the Parkes Tennis Club, won the Newcombe Award for Coaching Excellence – Club at a glittering event at the Palladium Ballroom at Melbourne’s Crown Entertainment Complex.

The Newcombe Medal at the Australian Tennis Awards presents a unique opportunity to celebrate the year in tennis with legends of the past and the greats of today. Awards were presented in 14 categories. Paralympic gold medallist and Australian Open champion Dylan Alcott winning the 2016 Newcombe Medal, the highest honour in Australian tennis.