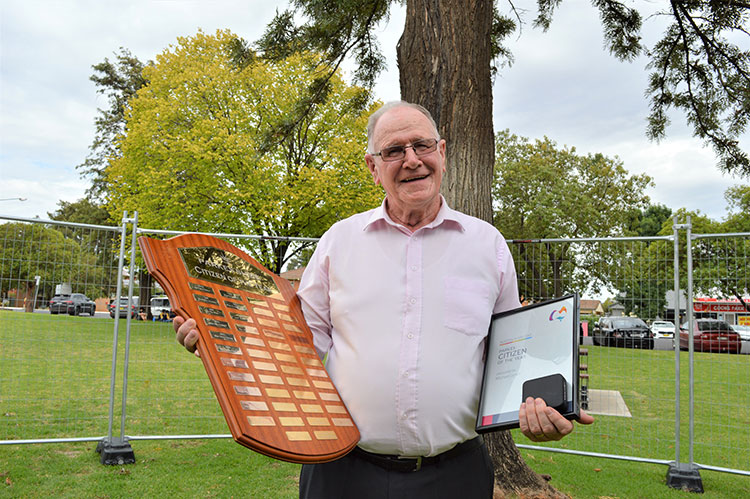 Michael Lynch is the 26th Parkes Shire Citizen of the Year.

Michael Lynch is known for his dedication in his daily life to helping others and on Tuesday he received the Citizen of the Year award as part of the annual recognition given to Parkes citizens on Australia Day.

“I am honoured and humbled,” he said after accepting the award. “Honoured that someone thought enough of me to nominate me.”

He said the other nominees, Ana Mill, Barry Garment and Hedley Nicholson were equally entitled to the award.

Michael, who looks for every opportunity to support his fellow citizens, said the people he admired the most in the community were the ‘backroom boys and girls’. “Those people who keep the wheels turning in order to keep the big wheel turning. They make my job and commitment a lot easier.” Michael is an extremely active member of the St Vincent de Paul Society, assisting those in need and advocating tirelessly on a range of social justice issues. In this role he has been particularly active in drought assistance. Since 2018 he has visited over 1,000 farms in the Parkes Shire and beyond, offering both financial assistance and a listening ear. Michael is also very active with the Prostate Cancer Support Group, Parkes Veterans Golf Club and his church community.

He said none of it would be possible without the support and assistance of his wife, Peg.