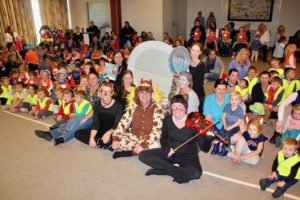 The leaping, high-flying cow had the record-breaking young audience in stitches on Wednesday at the Parkes Shire Library’s performance for Simultaneous Storytime.

The library joined the rest of the country for the annual event with all the pre-schools in Parkes attending, as well as the regular sto- ry timers and other members of the public.

“It is our best one yet,” said Sandie Ward who directed and narrated the performance of The Cow Tripped Over the Moon. “We seem to be getting bigger each year and might have to think of doing two shows next year to fit everyone in.”

The book by Tony Wilson is a story about friendship and perseverance. It is also a sto- ry about cows smacking into meteorites and hot air balloons and sand dunes.

Simultaneous Storytime not only promotes the value of reading and literacy, but also the fun of books and celebrates an Australian writer and publisher.

Members of the Library Council of NSW were also in the audience and were very impressed with the performance and the other services offered by the library. They visited Parkes Library for the first time in more than ten years to see how the library operates.

Shellie Buckle, Manager Cultural, Education and Library Services presented plans for expansion to the team and said she hoped for the best in the next round of grants opening in September.