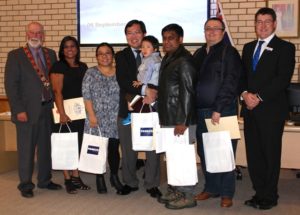 Mayor Ken Keith welcomed six new Australian citizens at a citizenship ceremony held in the Parkes Council chambers on Tuesday. The Mayor read a welcome message from Minister for Immigration and Border Protection, Peter Dutton, in which he said: “Thank you for taking this important step today. Australian citizenship confers on you great benefits; but equally rights and obligations.”

The six new citizens are from Malaysia, Fiji, India and Italy. Clarence Goh, Yee Wern The and their son Christopher came from Malaysia in January 2011. They moved from Melbourne to Parkes in July 2015. Clarence teaches at the Christian School and enjoys making computer games, robot assembly and programming, while Yee is a keen photographer.

Aruna Swamy arrived in Australia in 2006 from Fiji and moved to Parkes in August 2008. She loves all things Bollywood. Aswin Rajendran is originally from India and arrived in Australia in February 2012, and relocated to Trundle in September of the same year. He works as a registered Nurse and enjoys watching cricket, movies and farming.

Franco Tiveron came from Italy to Australia in January 2012 and settled in Parkes straight away with his wife and two sons. He is an engineer and enjoys music and software. “I congratulate these candidates on their decision to become Australian citizens,” said the Mayor. Each candidate received an official citizenship certificate, a Bible, Parkes Shire Council pen, Australian Citizenship coin and a Parkes booklet.