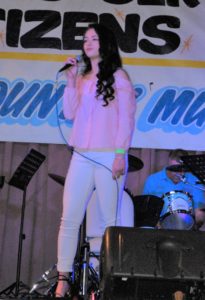 Mayor Ken Keith congratulated the Parkes Historical Society on its anniversary and the wonderful display of the Emmanuel family “a very special product of our community” at the official cutting of the cake on Saturday.

“It was a wonderful day with about 200 people coming to the museum,” said committee member Rose Jones. Vice-president of the Parkes & District Country Music Association, Lindy Charlton was just as excited about a successful weekend of country music. The 220 entries received for the talent quest was the biggest in years.

“Our competition has a big reputation and entrants came from all over the state and even Mildura in Victoria,” said Lindy. Despite tough competition some talented locals picked up awards. Parkes High School student Gracey Denham-Jones won three third places in junior gospel, junior Australian and senior duo she sang with Gail Smith.