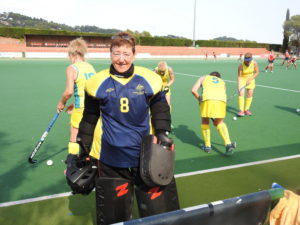 Parkes was well represented at the recent Hockey Masters World Cup in Spain with two local players running out for Australia. Maureen Massey and Graeme Tanswell played in Barcelona last month where 23 nations competed in men’s and women’s teams from over 35 to over 60 years.

Graeme played for the Australian Over 50s Men’s team who came home undefeated with the gold medal. Maureen Massey was goalkeeper of the Australian Over 60s women’s team and they won bronze. “It was a brilliant experience and to come home with some bling was an extra bonus,” said Maureen, who played in her third World Cup event, and represented Australia for the sixth time in her age division. It was Graeme’s first time in the Australian jersey.

Despite extremely hot conditions in Barcelona with the temperature reaching 40 degrees Celsius on some days, the Australian teams performed very well. “We played six games and finished up playing off for third and fourth position
against a Wattles Australian team,” said Maureen. This game finished with a one all draw so the bronze medal was decided upon by a penalty shootout won by our team 2 goals to 1.”

According to Maureen the best part of the experience was wearing the green and gold. “To represent your country is a huge honour at any age, although it does not come easily. There is a lot of time put into training, on fitness and skills. The levels of fitness of the women in this team is absolutely remarkable considering our ages.”

After a short break, Maureen will be flying to Perth at the end of September to participate in the Australian Women’s Masters Championships at Bunbury as goalkeeper for the NSW over 65 years women’s team.