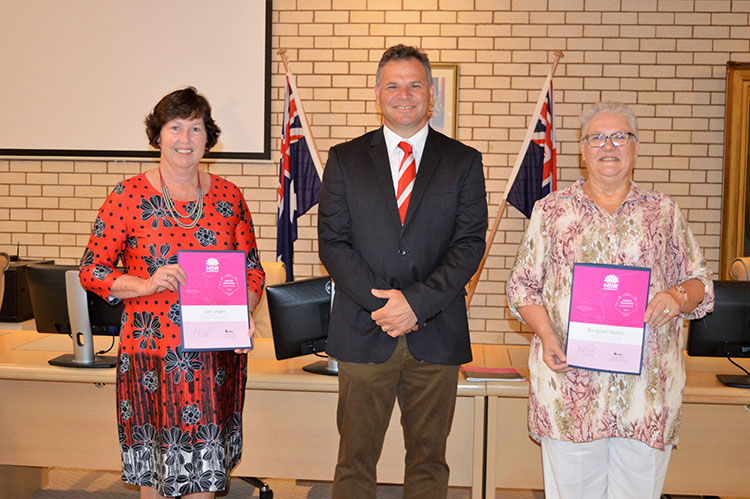 We do not always know about the hidden treasures in our community, but on Wednesday two local women were recognised for their outstanding volunteer work.

Margaret Haddin from Parkes and Judi Unger from Peak Hill received awards from Member for Orange Philip Donato MP in recognition of their inclusion in the 2020 Hidden Treasures Honour Roll with 102 other rural women.

Hidden Treasures is an initiative of the NSW Department of Primary Industries’ Rural Women’s Network. The aim of the program is to formally recognise and thank inspiring rural women volunteers within NSW rural, regional and remote communities.

“The Hidden Treasures award recognises the women volunteers who really go ‘above and beyond’ in what they do for the local community,” Phil said.

“These women ensure the viability of several important community groups and charities; without their contribution many local initiatives we take for granted would just not be possible.

“It’s an honour to be able to celebrate women volunteers who give so much of their own time, effort and dedication to their community.”

Phil thanked them for their invaluable contribution and said: “Our region is incredibly grateful for all that you do.” 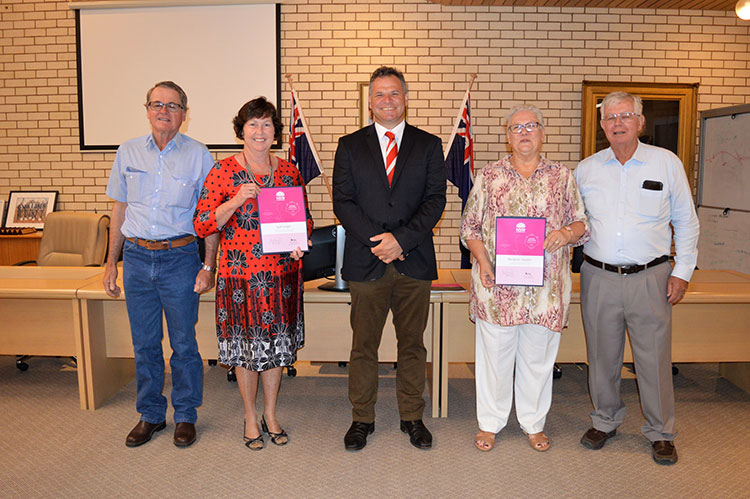 Support from family members is vital to being able to volunteer in a community as the two local hidden treasure candidates in the Parkes Shire have demonstrated. They were joined by their husbands at the ceremony on Wednesday. (L-R) are Ray and Judy Unger, Phil Donato MP and Margaret and Rob Haddin.

Margaret thanked her husband Robert for his support over the years, Marg Applebee for nominating her and the Parkes community for their support. She said the nomination came as a big surprise and that it felt good to be acknowledged.

Judi said she was very grateful for the nomination, but felt there were so many more deserving women who should be nominated. “The older you get, the more time you have to give to projects. When you are in a small community, there are not so many people with expert knowledge to help out.”

Margaret Haddin biography:
Margaret grew up in South Sydney, and move to Parkes in 1979 with her husband Rob to establish an engineering business and raise four children. She has contributed her time to Landcare, both locally and regionally over the past 10 years. Four years ago she joined the committee for Parkes Meals on Wheels, once again contributing her time and skills. She is still contributing endless hours each week to Landcare and Meals on Wheels. Margaret has been an active member of the Parkes community for more than 30 years, volunteering her time and knowledge.

Judi Unger biography:
Judi’s passion for empowering people in rural communities was nurtured during her formative years on the family farm east of Peak Hill. She chose teaching as a career, and when she retired as deputy principal at Parkes Public School in 2012, she left a legacy of personally created and innovative teaching resources and programs, which are still being adopted throughout the state. In the mid 1980s Judi and her husband Ray be-gan to convert their conventional farm north-west of Peak Hill to an Australian certified organic biodynamic broadacre enterprise. They now host annual workshops and field days to share their journey and knowledge. She is serving on the Board of Biodynamic Agriculture Australia while studying organic and biodynamic farming. Judi’s passion is to support women in agriculture. She also uses her photographic skills to promote arts and crafts and tourism.