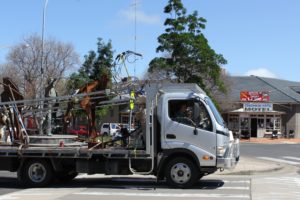 Horses being trucked through town are a fairly common sight in Parkes, but last Friday lunch time some lucky residents caught a glimpse of a steel steed rocking down Clarinda Street en route to Forbes. The sculpture, titled “Balance”, is by Oberon artist Harrie Fasher and is her latest entry into the Forbes Sculpture competition Somewhere Down The Lachlan.

The artwork is a double-ended horse on a rocking base; one end rearing, whilst the opposite end is quietly observing the world. It is constructed from steel rod, and looks like a three-dimensional metal line drawing, which has become Harrie’s signature style. She says the piece examines the divisions of a creative existence. The transportation from Bathurst to Forbes was something of a major operation, Harrie borrowed a large truck from Metaland, a metal fabrication company who supplies her raw materials, and encountered detours due to flooding and road closures. In the end Balance was delivered safely to Forbes, where it awaits judging.

Somewhere Down The Lachlan was launched in 2014, and is a sculpture trail that continues around the lake and along the Lachlan River between Forbes and Condobolin. It is complementary to other large attractions in the Central West including Parkes’ CSIRO Radio Telescope – The Dish, Taronga Western Plains Zoo, ‘Utes in the Paddock’ at Ootha and the Eugowra murals.

Harrie won the 2015 Forbes Sculpture competition with her metal sculpture titled “The Bird and I”, which has become part of the permanent collection in the Forbes sculpture garden. The 2014 Winner was Ingrid V Morley with a sculptural tribute to the former Albion Hotel, which tragically burnt down in 2009.

Unfortunately the official opening of Somewhere Down the Lachlan sculpture trail competition has been postponed as a result of the major flooding in Forbes.