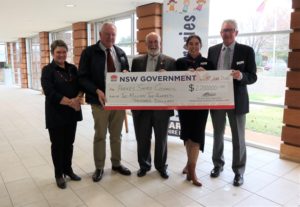 Parliamentary Secretary for Western NSW is definitely in the Parkes Library’s good books after he came bearing a $2.2 million cheque last Thursday. Rick Colless announced the biggest grant for a community building in Parkes for renovations to the library. “The library team started dreaming in 2015 and our dream came true today,” said a very excited Shellie Buckle, Manager Cultural, Education and Library Services.

Parkes Shire Mayor, Councillor Ken Keith OAM thanked Shellie and her library team, as well as the grants team for a professional application well done. “This is a significant investment towards supporting our community’s vision to establish a strong cultural identity.”

The expansion plans include a new technology-enabled exhibition pavilion to be built in the front garden opposite the Coventry room, as well as new areas for children’s programs, meetings, quiet study, connecting with technology, and green space.

The original architects from Sydney will be on board for the extensions, which Shellie hoped would be completed by mid-2019. The Parkes Library moved into its current premises in July 2000 and has become a popular public space with over 1,000 people using it every week with 1,500 items being borrowed per week. “People just love coming here as they feel comfortable and can spend quality time with their kids, or find a quiet spot to read,” said Shellie. “We have also become known as an exhibition space and are booked out until next year. With the new space we would be able to do so much more.”