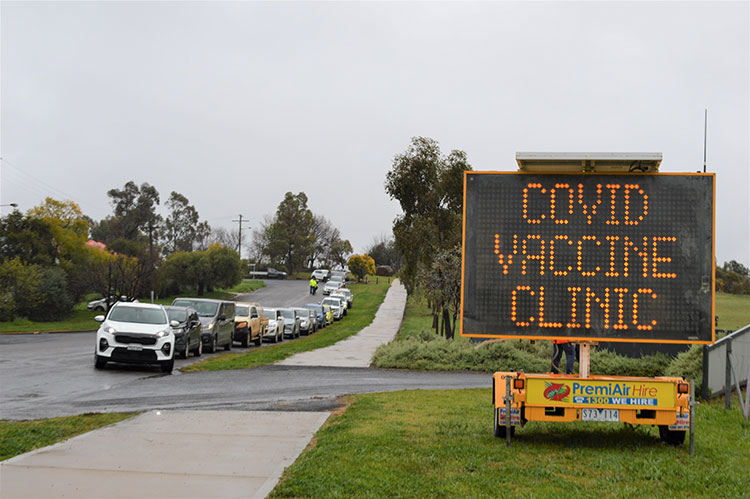 SUPER COMMUNITY… There was a massive response from the Parkes community on Tuesday with hundreds turning up to get vaccinated at the pop-up clinic at Northparkes Oval. The waiting line of cars snaked for more than a kilometre through several streets.

After more than a week of positive COVID fragments detected in our sewerage, a positive case was confirmed on Sunday followed by a further five cases on Monday.

At the time of going to press the number had not increased, but Chief Executive of Western NSW Local Health District Scott McLachlan said it took two to three days for symptoms to show and that Parkes residents should not hesitate to get tested. He said it was great to see 515 tests done on Monday, but by Tuesday it had gone down to 344 again.

“The clinic is at the Parkes Showgrounds every day. We would like to see double the number of people getting tested to the current numbers.”

The Parkes community did not hesitate to get vaccinated on the first day of the pop-up vaccination hub on Tuesday with 350 jabs given, which is the full capacity the ADF team could handle in a day. The aim was to have 1,200 to 1,300 people vaccinated by the end of Thursday.

Scott did emphasise though that the pop-up clinic was not the only way to get vaccinated and people should continue going to GPs, pharmacies and clinics.

He also said apart from staying home at all costs and minimising contact with other people, people should always make use of QR codes to help keep people safe.

Mayor of Parkes Shire Cr Ken Keith OAM said: “This is not a time for blame or social media witch hunts – this is a time for us to pull together as a community.”