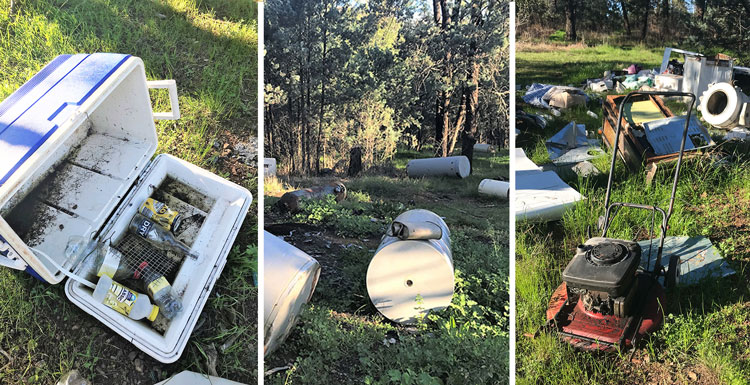 Some of the illegal dumping that litters the beautiful forested Crown Land area between Back Yamma Road and the Parkes Hospital. Locals enjoy the area for recreation, but the increase in rubbish is a cause of concern.

The degradation of a beautiful natural area and community asset in Parkes because of a massive increase in illegal dumping is a cause of concern for residents who like to go there for recreation.

The stretch of crown land between Back Yamma Road and the Parkes Hospital is popular for walking, running, mountain biking and other forms of exercise among locals in the area.

“The illegal dumping is ruining the area,” said Rosemary Prior who lives nearby and enjoys walking there with her husband.

“In one outing we counted four washing machines, six hot water systems, six mattresses, a TV, toilet and lounge chair. It is such a shame that people treat the bush as a dump.”

Erik Lensson, who like to call the area the forest, has been going there for over ten years. He said earlier on he and his wife used to pick up some of the rubbish, but there had been such an increase in dumping and in the types of rubbish being dumped that they could no longer do it.

He had written to Parkes Shire Council with some suggestions including putting up signs to warn people not to dump.

In response to these concerns, Parkes Shire Council said: “Please be assured Council recognises the problems regarding illegal dumping, burning out of cars and weed infestation in this precinct. Substantial resources have been used in the attempt to clear the sites and control the further dumping activities.”

One solution was to limit vehicle access to the area by fencing, but Council was unsuccessful in seeking funding from Crown Lands for this purpose. “Council continues to investigate funding to fence this State-owned land.

“Council continues to provide as much assistance as possible including the regular patrol by Council Rangers for problem waste and illegal use.

According to Council measures such as clean ups, patrols and surveillance cameras at the site have all had limited success.
“Further suggestions regarding signage is recommended and Council will investigate the availability of funding from the Environmental Protection Authority to assist.

“Council notes the positive contribution of residents in the area with private works being carried out including mowing and general maintenance in and around the site.”