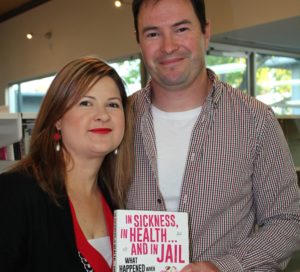 When eight policemen in suits knocked on Mel’s front door, she knew it was serious, but when they said her husband had been arrested and shoved a search warrant in her hand, she was completely taken by surprise. “I kept on thinking it had to be a mistake,” Mel Jacob told a good crowd at the Parkes Shire Library last Friday night.

In Sickness, In Health… and In Jail is Mel’s funny, insightful and moving memoirs about what happened to her family when her husband, Patrick, had to go to jail for two years. They were packing to go on holiday, when Patrick said he had to go to his warehouse to sort out something. He had an online business importing archery, camping and
hunting equipment. He never returned. With the Police searching their home, she thought there must have been a problem with customs, as he often had. It was only at his bail hearing she found out he was charged with possession and selling of prohibited weapons – a crossbow, slingshot and unlicenced rifle.

Patrick was released on bail that started a very long and financially costly court case over two years. Despite everyone’s assurances that he would never end up in prison and the fact that he was legally entrapped by a Police sting operation, he was sentenced to 4.5 years in prison. He ended up serving two years. With Patrick in the audience in Parkes, Mel related with many funny anecdotes how they were on a big learning curve during the two years. “At first I was worried people would judge me and our two children, but an incredible thing happened – they were incredibly kind, gracious and supportive.” Mel said she had come to experience the very best of humanity, while sadly Patrick had experienced the absolute worst. “It made it very difficult to understand each other. We had no understanding of what it was like for the other one. When he came out 18 months ago he was not the same person who had left us two years earlier.”

Mel, who is an experienced journalist and scriptwriter, always wanted to write a book. She just never thought it would be about her husband going to jail. She said the stories Patrick told her were just crazy. “It is stuff you could never make up. It had awakened me to a world I had no experience with whatsoever. It also made me think a lot about how we treat the weakest in our society.” Mel said their policy from the start was to be open to the children (who were five and three at the time of Patrick’s arrest) about what had happened, but the experience had opened them up to how complicated life could be at an early age.

For the Jacob family the first line of Mel’s book: “Muuuum, it’s the police!” will always bring back a mixed bag of emotions.