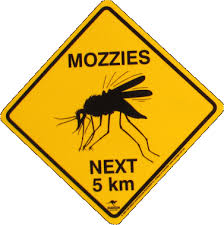 NSW Health is urging people to safeguard against mosquito bites after a marked increase in detections of the mosquito-borne Ross River and Barmah Forest viruses. Stephen Doggett, Senior Scientist at NSW Health Pathology, said recent flooding had caused a proliferation in the number of mosquitoes. With added swarms of mosquitoes
we have detected Ross River Virus and Barmah Forest Virus in mosquitoes in Forbes, Griffith, Leeton, and Moama.

“Ross River and Barmah Forest viruses are spread by bites from mosquitoes that have fed on animals that carry the virus. These viruses are not fatal to humans but they can cause persistent and debilitating symptoms such as joint aches and pains, fever, chills, headache and sometimes a rash. The rash usually disappears after seven to ten days,
but some people may experience these symptoms for weeks or even months. So far 63 cases of people with Ross River and Barmah Forest virus have been confirmed.

The best way to avoid infection is to avoid being bitten by mosquitoes.”
Simple steps to avoid mosquito bites:
• Screening all windows and doors to prevent mosquitoes from coming inside.
• Avoid being outside unprotected, particularly during dawn and dusk.
• Apply mosquito repellent regularly to exposed areas. Repellents containing DEET or Picaridin are best. Repellents
containing oil of lemon eucalyptus or p- Menthane-3.8-diol (PMD) also provides adequate protection.
• Don’t use repellents on children under the age of three months. Instead use physical barriers such as netting on prams, cots and play areas for babies.
• Light mosquito coils or use vaporising mats indoors.
• When mosquitoes are inside, use insecticide sprays, especially behind furniture and dark places.
• When camping, use flyscreens, or sleep under mosquito nets.
• Get rid of items that hold water around the house.