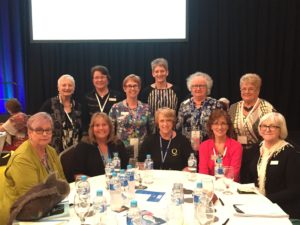 The Parkes Club of Quota International has received worldwide recognition for its efforts at the International Convention held in Brisbane recently. Parkes was recognised as one of the Quota Cares Monthly Award Winners for 2015 in recognition of the club’s efforts in hosting International Women’s Day; the donation of a Soundfield System to Peak Hill Central School; funding for two students to attend the Veronica James Science Challenge in Sydney; and the Survivors afternoon tea, which supported the Cancer Council’s Relay for Life.

Parkes also received acknowledgement for the $10,000 Achievers Award for 2016. This award was a result of the outstanding Open Garden event held in October last year when just over $10,000 was raised. “Our members worked hard to raise money to empower women and children, the deaf, hard of hearing and speech impaired, and receiving international recognition is a big achievement for us,” said Raelene Rout, President.

The members who could not go to the convention participated by making stars, which were hung and displayed in support of the “One Million Stars to End Violence” Project. Quota International has committed to support this project to collect one million stars from all over the world prior to the Commonwealth Games at the Gold Coast in 2018.
By Lynn Rogers