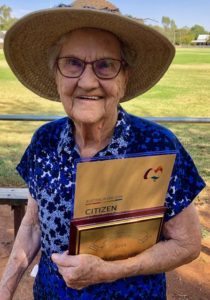 The message of the importance of a caring community by the Australia Day Ambassador in Cooke Park last Saturday touched the crowd of more than 300 people deeply. “We as a community have to be courageous and willing to care and support each other,” said Allan Sparkes. “We need to rebuild and strengthen that core of being Australian and do whatever we can to help a mate no matter what and to never give up.

That is what being Australian is all about.” Allan, who grew up in Cumnock, said as the Deputy Commissioner of the Mental Health Commission of NSW it broke his heart to see so many people struggling psychological health issues, especially farmers during times of drought.

He and Deputy Mayor Barbara Newton have agreed on a plan that he would return to Parkes to educate the community, “especially men, on what to do to regain mental health. The more we care, the stronger we will make our community, our society and our nation.”

As Riverina MP and Deputy Prime Minister Michael McCormack said in his message: “Communities may be built of bricks and mortar, roads and footpaths, shops and services and other vital infrastructure, but what really builds them up, what really makes them grow and thrive is the selfless work of their people”, it was clear the Parkes Shire community was no exception.

The services of three residents of the shire were recognised with Order of Australia (OAM) awards, while Pat Bailey and Emelina Lavaka were named Citizen of the Year and Young Citizen of the Year respectively. All the award recipients agreed it came as a big surprise and they felt very honoured.

“I am honoured, humbled and sad,” said Ellie Hetherington OAM, “as it should’ve had my husband’s name on it too. I could not have done it without him.” Ellie was recognised for service to the community and founding ‘Ellie’s Plants for Charity’ in 2011, raising thousands of dollars for CanAssist.

“It was never meant to be that big. I was just trying to fulfil my sister’s request. The community has been so good to me and supported me so much.”

For 91-year-old May Collier of Trundle “it is more an award for the community. I have been in this community for 90 years and had lots of opportunities to help,” said May, who is still active with whatever she can do.

“We have a wonderful and supportive community and I am very fortunate to be part of it.” May was also named Trundle’s Citizen of the Year. John Pizarro OAM, said he never ever expected to receive such an honour in his life. “It is just amazing although I don’t think I deserve it, but will take it! John was recognised for his service to motor sports since the 1970s.

Citizen of the Year Pat Bailey said the highlight of the more than 23 years of volunteering for CanAssist was the achievement of bringing chemo therapy to Parkes in 1999/2000 after starting a petition for it. “Patients had to travel to Orange and now with the new hospital we have two Oncology nurses in Parkes twice a week.”

The award is a big honour for Pat, “but I do not volunteer to win awards, I do it to help other people. She said the most rewarding part was knowing she had helped people.”

As school captain of Parkes High last year, Emeline initiated and organised many projects and events to raise awareness and funds for good causes. She felt very proud of her award.