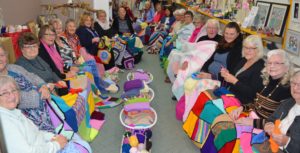 The Craft Corner was wrapped in love last Thursday when more than 40 women participated in the annual Knit and Natter event. A group of 15 women from Orange joined in for the second year, and Brooke Daniels from ABC Radio was invited as special guest for the morning. Women from Parkes and Peak Hill helped to knit and crochet a few thousand squares to create rugs. According to President of the Craft Corner, Rosemary Mitchell they have been taking part in the annual Wrap with Love initiative for 15 years.

Wrap with Love, a registered charity, reach more than 30,000 people each year in Australia and around the world. “It is very exciting to watch television and see people with colourful rugs wrapped around them and knowing it might have been made by one of us,” said Rosemary. She said Wrap with Love works closely with the Catherine Hamlin Fistula Foundation in Ethiopia in Africa.

One rug is made up of 28 squares measuring 25cm X 25cm. Rosemary expected the Craft Corner to contribute about 50 rugs to this year’s drive. The rugs will go to Sydney from where it will be distributed around Australia and the world.