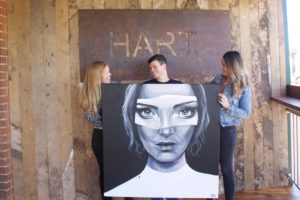 Since day one Jac Clark’s art has featured throughout The Railway Hotel so when it came to decorating the walls of the new Hart Bar there was no question about what it would be. “We are lucky to be able to hang some of Jac’s prints and we also purchased one of her new original’s, which is seen in the Hart Bar logo and advertising. That is really exciting!” said Kasie. Kasie Ferguson and Bianca Sheridan have owned the Railway for six years and have just finished building the new bar on the second level named after their little boy, Hart! “When we walked in all those years ago I knew it would be something special, but I never thought it would be this amazing! The people who have worked on this project made our dreams come true. I can’t thank them enough for it,” said Bianca.

Hart Bar is booked out most weekends until Christmas, but next weekend Hart Bar will be open for lunch and dinner Friday, Saturday and Sunday with Jac Clark’s art on display to celebrate the official opening. The exhibition is titled Figure and explores the boldness of a monochrome palette. The original large scale artworks will be available
for purchase with limited edition prints of each piece.