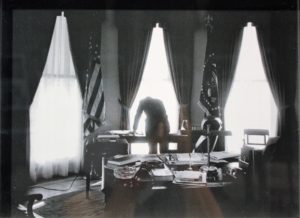 Another American icon is on show during the Parkes Elvis Festival with the US Consulate bringing a photographic exhibition, commemorating President John F. Kennedy’s life and work.

“American Visionary: John F. Kennedy’s Life and Times” will be on show at Parkes Library until Sunday, and celebrates President Kennedy’s centennial. It is one of the most exhaustively researched collections of Kennedy photos ever assembled, including iconic and rare images.

Parkes Library is the second Australian venue to present this collection. Australia is one of only 12 countries where the exhibition will be shown after its debut at the Smithsonian American Art Museum in Washington in May last year.

Australia has links with Kennedy of which the most important is probably the fact that his life was saved by an Australian CoastGuard officer, Arthur Evans when his patrol boat PT-109 was torpedoed off the Solomon Islands during World War II. President Kennedy later invited Arthur to the White House.

Kennedy also made a promise at the NASA headquarters in 1961 to put a man on the moon before the end of the decade, and in 1968 the Parkes Radio Telescope played a major role in the first moon landing. Michael Bowerbank, Cultural Affairs Officer of the Embassy of the United States of America in Canberra, said at the opening of the exhibition on Tuesday night President Kennedy achieved so much during his two years, especially in terms of civil rights.

“That is one of the main roles of this exhibition is to inspire the next generation with the values he held in such high esteem.” The exhibition brings together 77 images selected from the John F. Kennedy Presidential Library, the John F. Kennedy Library Foundation, Getty Images, private collections and the Kennedy family archives that capture the dramatic scope of Kennedy’s life.