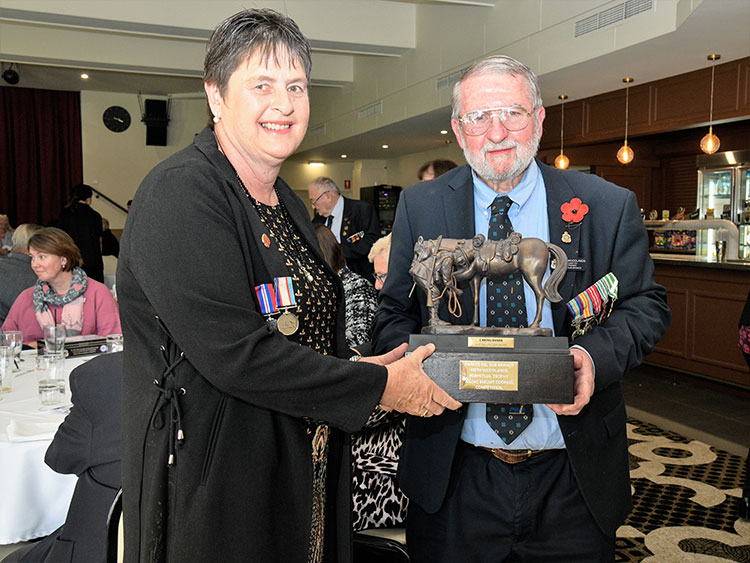 Julie Freeman was announced as the winner of the RSL NSW Anzac Biscuit Cooking competition in Parkes at the 2021 Anzac Day Official Luncheon on Sunday.

The competition was divided into three levels and saw Julie take the lead in a very competitive field in the senior division, which also competed for the Keith Woodlands Perpetual Trophy as part of the Parkes RSL Sub-Branches local competition.

Julie said she had been cooking from an early age after learning the basics from her mother at the family property. “I loved making Anzac biscuits and sending them off to soldiers who were away serving our wonderful nation,” she said when accepting her prizes.

Julie will now proceed to the Western Districts level of the competition to be held in Dubbo during August. The winner of that section will go on to represent the Western area at the state final to be held in conjunction with the NSW RSL Annual State Conference in Newcastle during October.

The junior section for entrants 16 years and under saw another close competition with the three judges undecided on the result till the very last moment. The eventual winner was Joan Carolan, who edged out Ella Jablowski with Quinn Kriedemann receiving the encouragement award.

Parkes RSL Sub-Branch President Keith Woodlands and Sub Branch secretary Paul Thomas congratulated and thanked all participants and said the Sub-Branch would continue to support the state body in the event in future years. They also thanked the three judges namely Anne Olsen, Bev Hawken and Nerissa Westgarth for their assistance and commitment to the task.

Anne Olsen spoke on behalf of the judges and said the competition was extremely close. She said while the level of participation was not excessive, it was highly commendable. She made special mention of the exceptional commitment of the male competitors as they challenged one another.