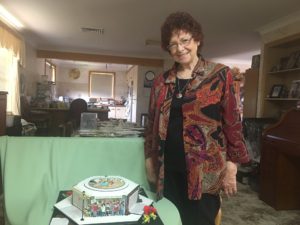 Eating cake is one of life’s pleasures many of us enjoy, but have you ever thought of reading a cake? Parkes’ exceptional sugarcraft artist Kath Swansbra has created one of the most interesting projects of her 30-year life as a cake decorator by telling a remarkable story of French-Australian relations.

Based on Derek Guille’s book, ‘The Promise’, the cake tells the story of the World War 1 battle of Villers-Brettenoux where 1,200 Australians died saving the village. The French have never forgotten the sacrifice – the Australian flag still flies over Villers-Bretonneux and a plaque tells the story of 1918. After the war, money donated from Victoria students paid for the rebuilding of the village school which was renamed ‘Victoria School’.

“I had visited Villers Brettenoux but I didn’t know… that 100 years later the children and families of Victoria school in Villers-Brettenoux raised about $20,000 and donated it to Strathaven in Victoria following the 2009 bushfires,” said Kath.

When the Telopea Park School in Canberra asked Kath to make a raffle cake for their annual La Grande Fête, Kath’s research inspired her to make something more. “This story is so important to be taught to children as it promotes goodwill and friendship and the give and takes in society—something that I think we are losing in modern society.

After three months of research, planning and creating, the masterpiece telling the story in both English and French, was not raffled at last week’s fete, but will be kept in the school library.