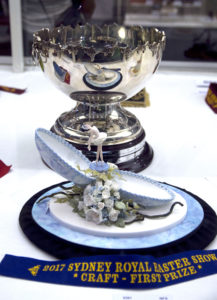 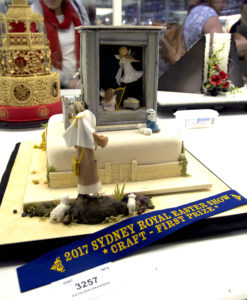 Local legend Kath Swansbra has once again taken out top honours in the Arts & Craft awards at this years’ Sydney Royal Easter Show. Kath’s delicate delectables are so impressive that she has won three awards despite only submitting two entries this year.

Kath’s Christmas cake claimed first place in the special occasion cake decorating cat- egory. It is a divinely crafted nativity scene that depicts the first Christmas. Its intricate features include a stable, angels playing a violin and a harp, three wise men, a shepherd with his sheep and desert dunes around the edge.

She joked that she had to watch Lawrence of Arabia several times to get the dunes right. Kath really enjoys doing major jobs that involve a bit of research and a lot of patience. “Sometimes it might take me ten attempts just to get a hand right,” she said. “Icing cracks and you have to start again.It’s a matter of learning your medium.”

Her second entry earned another first place – this time in the sugar art deco- rated egg category. Kath’s hand-moulded sugar egg is an ornate creation that opens to reveal a ballerina. The 11 cm egg took nearly four weeks to create, and it seems the judges appreciated her effort and skill. Her exquisite egg was also the winner of the prestigious Dorothy Evans Perpetual trophy for the best exhibit in cake decorat- ing and sugar art. Kath has won the tro- phy more times than she can remember, but this doesn’t make the victory any less sweet.
“I miss out on it every couple of years,”

Kath said. “But it’s still such a relief to win. I’ve only got one way to go, and that’s down,” she joked. “It’s great to know I’m still good enough with all the younger people who are entering.”