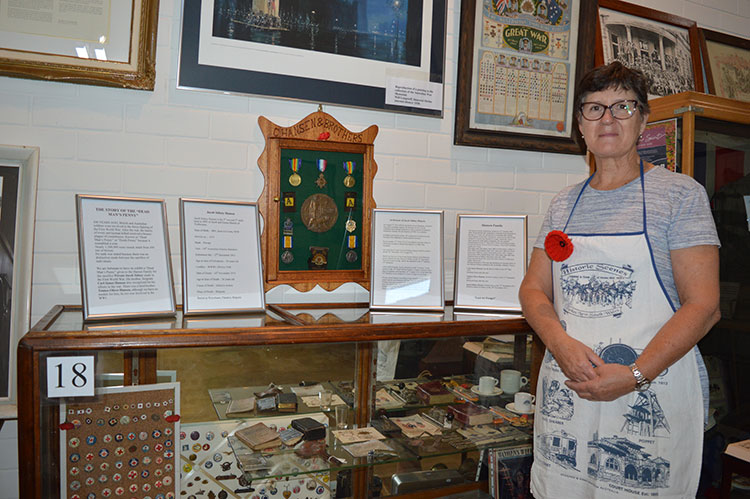 LEST WE FORGET… Rosemary Prior of the Parkes and District Historical Society researched Jacob Hansen for the display at the Henry Parkes Museum. Insert: A close up of the Dead Man’s Penny in honour of Jacob Hansen.

The Coronavirus has turned our lives upside down, and daily complaints about empty shelves in the shops and home-schooling our children have become the new norm.

Perspective can be very sobering, and with Anzac Day approaching, here is a story of another time of turmoil.

When Jacob Sidney Hansen of Tichbourne was 24 he enlisted in Dubbo just over a year after Britain declared war on Germany on 4th August 1914.

After his initial training Jacob embarked on the Ceramic troop carrier in April 1916 and sailed to the Sues, then to England arriving four months later. He was attached to the 2nd infantry 54th battalion and they were shipped to France to fight on the front.

He was sadly one of the more than 60,000 Australians who did not return when he was killed in action on 16th November 1917 at age 26. His time at the front was a nightmare according to his casualty records suffering major injuries and illnesses, including trench foot twice and mumps.

After the war the family of every serviceman killed received a bronze plague of condolences known as Dead Man’s Penny or Death Penny as it resembled a coin.

Jacob’s plague, as well as medals of his two brothers, Carl James and Tennos Oliver, who also served in the war are on permanent display at the Henry Parkes Museum with some history of the Hansen family. (The museum is currently closed until further notice in accordance to the new rules.)