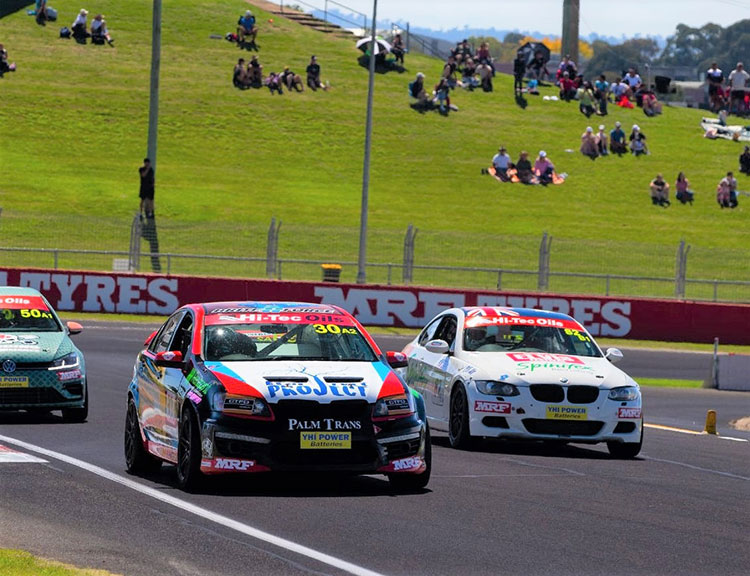 With the King on board, Mt Panorama’s most travelled race car came away with a class win at last weekend’s Hi-Tec Oils Bathurst 6 Hour event and lots of publicity for the Parkes Elvis Festival.

Apart from two blown rear tyres on Conrod Straight at around 250 kilometres an hour, and a minor fuel leak from a loose clamp, the car preformed faultlessly from the start to the finish and won the B1 High Performance Forced Induction class. They finished 26th outright (of the 60 that qualified) and won the class by 16 laps.

“The Parkes Elvis Festival has a motor racing theme next year and what a way to promote through a great motor race such as the 6 Hour at Australia’s most famous circuit,” said Peter.

Peter started the race with car racer Peter Johnston taking over at the first schedule pit stop, while car preparer Garry Mennell completed the next two stints before he handed off to Peter Johnston for his second period behind the wheel. For the final run to the chequered flag, Peter O’Donnell returned to the drivers’ seat.

The BMW is Mt Panorama’s most experienced and prolific enduro campaigner. It won the 12-hour race twice outright (when it was a production car event) and has five class victories. In all, the various driving crews have stood on the podium as a place-getter in 10 of the 13 contested enduros.

The car has an astonishing finish record, completed more laps, and covered greater kilometres than any other car on Australia’s most famous racetrack. The venerable coupe has chalked up an amazing 3,318 laps of Mt Panorama and 20,614.734 kilo-metres in practice, qualifying and racing in the 12-hour, six hour and other events at the circuit.