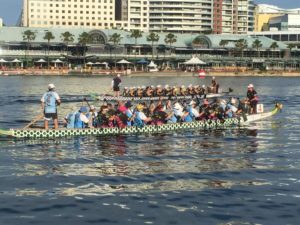 Fourteen paddlers made the annual trip to compete in the premier mixed and women’s races. They were be joined by the Orange based Pinnacle Dragons to fill the boat.

Although the team didn’t gain a place in any of the finals, the squad performed brilliantly in a balmy 39 degrees Celsius. They finished five of the seven races in sub one minute time for the 200m events.

Next month the Lachlan Dragons will compete in the Canberra regatta, once again combining with Colour City Orange paddlers in the mixed team.

Six Lachlan Dragon club members have gained selection in the Western Region team. They will compete at NSW Cham- pionships on 26th March in Penrith. Con- gratulations to Helen Rowbotham, Claire Davis, Carmen Stephens, Beth Thomas, Rochelle Smith and Warren Edwards. Beth has been appointed manager for the squad. They have been training hard over weekends at waterways around the Central West.

Paddling continues twice per week, leaving from the new boat shed on Lake Forbes: Thursdays at 5.45pm and Sunday mornings at 8.15am. Anyone who wants to see what dragon boating is all about, you are welcome to come along.