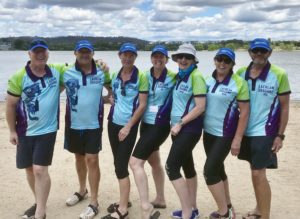 Seven members of the Forbes Dragon Boat Club have been selected to represent Western NSW in the upcoming National Dragon Boat Championships. They are Bill and Beth Thomas, Warren and Donna Edwards and Rochelle Smith of Parkes; and Chris Favelle and Claire Davis of Forbes. The championships will be held at Lake Kawana on the Sunshine Coast, with Western NSW competing on 4th of March.

The ‘magnificent seven’ have been training hard under State coach Deb Clarke, and assistant coach Lou Linke. They took part in a regatta against the top ACT teams on Lake Burley Griffin on Saturday with some of the crew competed in as many as nine races, all over a distance of 500 metres!

“It was a fabulous day on the water,” said Coach Deb, “with everyone paddling so strongly and with commitment.” It was a rewarding day as the teams made all finals and won one gold and one bronze place. “The feeling of being in a boat racing to first place is indescribable,” said Beth Thomas. “Paddlers are totally focussed on their individual part in the race, but are conscious as well of keeping perfect time and technique with their fellow crew members.

As our boat cut through the water, we were very closely flanked on either side by the fastest of the ACT teams. Neck and neck. Stroke for stoke. Beat for beat. Then the Western team found their ‘inner mongrel’ (as the coach likes to quote) and we drew away in the last few metres to take the first place. It was an exciting end to a great day.”

If you’d like to join up and become a dragon boater, practise times are on Thursday at 5:45pm or Sunday at 8:15am at Lake Forbes.

Receive The Phoenix via Email