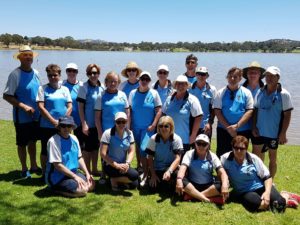 The Lachlan Dragons had a great day at the Wagga Wagga Dragon Boat Challenge regatta last Sunday with the men’s and women’s teams reaching the finals. The Men’s team, a mixture of Lachlan Dragons and Orange Colour City, paddled with sheer determination in a very close race to gain second place in the finals. They received a very smart trophy for their efforts. The Women’s Lachlan Dragons team, with four guest paddlers from Orange Colour City and Wagga Bidgee Dragons, raced their hearts out to be placed fourth in an extremely close finish.

Nineteen paddlers made the annual trip to compete in absolute perfect weather that enabled all team members to demonstrate their skills and teamwork, which they had trained to perfect over the last few weeks. Under the guidance of the new Club Coach, Carmen Stevens, new and old paddlers came together and worked as well drilled teams for all the races. Only three weeks ago, the Lachlan Dragons had their first regatta of the year competing at Orange with full teams in the Mixed, Men’s and Women’s events. The mixed team won second place in the finals
– a huge achievement against very well drilled sides from around the region.

The Club congratulates Bill Thomas on his recent accreditation as a Level 3 sweep. This enables Bill to not only sweep on the Forbes Lake for the Club but to also be the sweep for teams in all regatta events. Six Lachlan Dragon Club members gained selection in the Western Region team last week after many weeks of selection trials. Congratulations to Helen Rowbotham, Claire Davis, Carmen Stephens, Beth Thomas, Rochelle Smith and Warren Edwards. Beth was also appointed manager for the squad.

The Club has had a huge season so far with the construction of the boat shed, the purchase of two new boats, welcoming new members and competing in two regattas. The club Christmas party is on 15th December at the Forbes Bowling Club with all members encouraged to come dressed in the Christmas spirit. Paddling continues twice per week – Thursdays at 5.45pm and Sunday mornings at 8.15am leaving from the new Boat Shed on Lake Forbes. Anyone curious to see what dragon boating is all about, come along on a Thursday or Sunday. With two boats there is plenty of room for everyone.