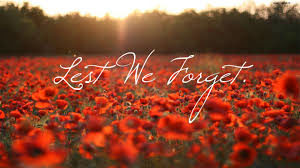 Today marks Remembrance Day, and at 11am we will stop to observe two minutes of silence and reflect on the loss and suffering caused by war. Parkes Shire residents are invited to attend a Remembrance Day Commemoration
Service at the Cooke Park Cenotaph at 10.55am, which is hosted by the Returned and Services League of Australia,
NSW Branch, Parkes Sub-Branch.

The service will involve a parade of former and current service personnel, the traditional Reveille, reading of poems, the citation of the names of the fallen by local school children, laying of wreaths, and prayers of thanksgiving. In the event of wet weather the service will be held in the Starlight Lounge of the Parkes Services and Citizens Club.

The service honours those who have suffered or fallen during war, and is a tribute that began after the First World War. The World War I cease-fire came into effect at 11am on the 11th of November 1918, ending four years of conflict. Each year Armistice Day was observed at the same time the guns had fallen silent across the Western Front. Following World War II Armistice Day was renamed Remembrance Day to acknowledge the sacrifices given in both
World Wars.

Today Remembrance Day commemorates the loss of lives from all wars and conflicts. Arthur Parker, President of the Parkes RSL sub branch said that our soldiers made the ultimate sacrifice to keep us safe. “Had they not fought for peace in all previous wars we would not be able to lead the life we lead today. It’s only right that we remember the fallen on this day,” he said.