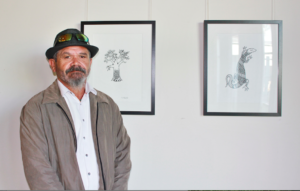 You might not be familiar with Scott ‘Sauce’ Towney, but chances are you would be familiar with his work. The Wiradjuri man from Peak Hill is one of our shire’s most prolific working artists. In the past few weeks Sauce has been involved in several public projects – and has plenty more already on display.

Wiradjuri Murriyang – or Wiradjuri Sky World – was his most recent exhibition. It forms part of the Big Skies Collaboration and was part of the Skywriter’s Big Gig last weekend. The works are based on his inter- pretation of the Wiradjuri constellations. The artworks have been loaded into the astrono- my software Stellarium, which positions the constellation images against the night sky.

Last Friday also saw the public installation of his work on the Parkes Community Wall. That work comes from a collaboration with

other local indigenous and non-indigenous artists, and was originally displayed in the Erratic Symbiosis exhibition that was host- ed in the Parkes Shire Library last month. This all comes just weeks after the rededication of the Peace Precinct, a totemic sculptural garden that also features his work. Sauce also has numerous national and international projects in the pipelines.

Sauce says that pyrography portraits are his favourite work. “There’s something re- ally special about burning a picture with a hot tool,” he said.

“A lot of my work is based on traditional ceremonial tree iconography. The marks are used in ceremony, so I contemporise it, to preserve the Wiradjuri patterns.”