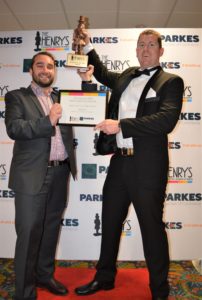 More than 250 people in their best evening attire attended The Henrys gala presentation hosted by the Chamber of Commerce at the Parkes Services Club to support the nominees in 16 award categories.

The coveted Parkes Business of the Year award went to Regos Plus Tyre & Mechanical – one of four awards the business was presented with during the ceremony. Owner Patrick Lenehan said: “We couldn’t do it without our team and dedicated customers.”

Meanwhile in Kiama Mayor Ken Keith OAM was honoured with the Cities Power Partnership (CPP) Ambassador Award at the inaugural CPP Awards. The Mayor was recognised for his commitment to renewable energy and his enthusiastic advocacy for solar power systems.

“I am overwhelmed to have been honoured with this award. Parkes was one of the founding member councils of the CPP, and I am delighted to see that it is going from strength to strength.”

The award was presented by Californian climate champion Rex Parris, who is the Mayor of Lancaster – the world’s first zero net energy city.

The CPP, an initiative of the Climate Council, was established to help Australian towns and cities make the change to clean energy. The awards celebrate the outstanding work of local governments in the fields of renewable energy, energy efficiency, sustainable transport and community advocacy. More than 100 councils from across the country have signed up to the CPP.