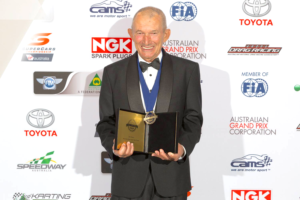 Not many people would expect to win an award more than 20 years after competing in their last race, so it’s understandable that John Pizarro’s most recent accolades took him by surprise.

In March this year John was inducted to the Australian Motorsport Hall of Fame, a prestigious honour shared by other motor- sport greats, such as three-time Formula 1 world champion Sir Jack Brabham and five-time MotoGP champion, Mick Doohan.

John admitted that he was completely stunned when the Confederation of Aus- tralian Motorsports asked if he would be prepared to accept the award. “It was quite a surprise.” He said, “It was the last thing on my mind.”

The Parkes Rotarian was among 21 new inductees who were celebrated at a gala function in Melbourne.

Motorsports enthusiasts would know his recognition is well-deserved. John is one of the most recognisable names in Australian karting and is considered to be royalty in the scene.

He earned an impressive record of titles throughout his 30-year career including 15 Australian karting championships. He won races all around the world, competed in five world championships, and won the CIK Asia-Pacific championship.

His contribution to the sport is so well regarded that there is a trophy named after him. The perpetual John Pizarro Trophy is awarded to the champion of the Pro Gear- box class, recognising the highest per- forming karts.

While many consider karting to be a gate- way motorsport, John proves that it’s pos- sible to forge a highly-regarded career on the karting track. He credits his loyalty to the sport as a combination of pragmatism and competitiveness.

“Other motorsports are expensive, and I didn’t have the money for the winning equipment. I liked winning, and I could win in karting.” he said.

He started racing at just 18 years of age after being introduced to the sport by his brother-in-law. “We purchased an old kart with an even worse engine, and broke the con rod on the first race.”

While his brother-in-law was deterred by the experience, John found the challenge enticing. He purchased a bare chassis and embarked on a kart engineering odyssey that took him to the top. “I moved on to a Victor mower engine, and then a McCull- och engine, then proceeded onto an Italian rotary engine.”

It’s no surprise that he managed to strike a winning formula. “When you’re good at something, you work hard, and the harder you work, the luckier you get.” he said.

During his karting career John raced every other weekend, and worked his day- jobs in between; a commitment made more challenging because he had to travel to train on a kart track.

“I worked very hard.” he said. “My phi- losophy is when it’s good, make it better, and when it’s better, make it the best.”

It’s a work ethic that he has taken with him long after his retirement from the racetrack. John owns the 4.5 star Astro Dish Motel, which he built from scratch.