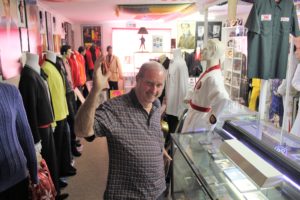 He was not christened Elvis, but since the very first time he saw an Elvis movie he was hooked. Steve Lennox was only seven when he went to the Saturday matinee at the picture theatre in Bourke to see Love Me Tender. “It was his voice and the songs that got me.”

This first impression seemed to have been an extraordinary one with fate working its magic too as Steve met a girl from Parkes, married her and moved here in 1981. By then he had started collecting Elvis memorabilia in earnest and was very happy when Shanghai Charlie arrived in Parkes for about three years in a row selling Elvis picture boards and other items.

At the first Parkes Elvis Festival in 1993, Steve and his wife Debbie made their own jumpsuits and he won the Elvis Look Alike competition. He enjoyed it so much that he joined the committee and has been on it ever since.

When he moved into a new house in 1996 with a double garage, the idea of opening his extensive collection to the public was born. With the arrival of internet shopping, he has been buying lots of stuff from the States.

The following year turned out to be a big one for him as he opened his museum at the festival for the first time, he changed his name to Elvis by deed poll and he visited Graceland in Memphis with Debbie.

“The hair in my neck tingled as I walked up the steps. It was real good.” So was the gift shop at Graceland. “We had to ship everything we bought back here.” His most precious item from the thousands he has collected over the years is the Aloha Suit and cape he bought from B & K Enterprises on the internet as it was one of Elvis’ favourite suits.

With space for only about three-quarters of his vast collection, Elvis has not stopped dreaming. “My aim is to get more embroidered jumpsuits – the one with the Mexican sun dial and the dragon one.” But his priority is to extend the museum hopefully in the near future as this passion clearly has no expiry date.

“I love this time of the year, meeting people from all over Australia and the world, answering their questions,” said Elvis who could not wait for the up to 600 fans who visit his museum during the festival eliciting stunned reactions and comments of appreciation and awe.

“I do not have money to buy rare or original pieces, but every piece is bought with love straight from my heart, and I think people can see that.” And that is all that counts for Elvis as he fondly remembers a lady who spent about 45 minutes in his museum and came out with tears streaming down her face saying: “He’s not dead is he? Because
you keep him alive.”