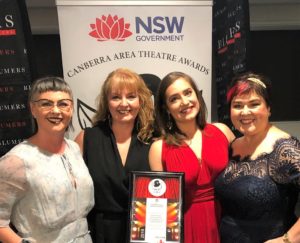 In a huge and well-deserved achievement four local talented women received the coveted Canberra Area Theatre (CAT) award for Best Ensemble in a Musical in Canberra last Saturday. If you saw Shevaun Brown, Christie Green, Christa Radley and Kimberley Harris in Motherhood the Musical at the Parkes Little Theatre in May last year you
would agree they deserved this prestigious award.

It was a complete four-woman show with direction, choreography and stage-set, as well as acting and singing by Christa, Christie and Shevaun of Amitie, with valuable input from the fourth cast member Kimberley Harris. “I am so grateful to have been ‘adopted’ by these amazing ladies,” said Kimberley who slotted into the team seamlessly, playing the pregnant Amy.

The musical was also nominated in a second category for Best Direction of a musical or variety show. “Christie, Christa, Kimberley and I are incredibly proud of what we have achieved,’ said Shevaun. “We had a huge sense of accomplishment at the end of our show season and felt we had really put on a quality show. To receive two nominations was a huge thrill, but to actually win an award is just fabulous.’

The girls were up against some incredible competition with more than 80 productions from places like Dubbo, Bega, Albury, Bathurst and Canberra in the running for awards.

The Parkes ‘Fab Four’ were asked to perform at the ceremony and were just about to go on stage when their exciting win was announced.