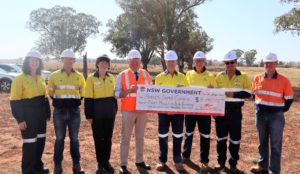 “The Hub has been a long-term vision of Council and we are now one step closer to establishing Parkes as the state’s first inland port,” said Parkes Shire Councillor Alan Ward.

“Parkes is uniquely positioned at the intersection of the East West rail line, the North South Newell Highway and the new $10 billion Melbourne to Brisbane Inland Rail, which provides immense opportunities for logistics, manufacturing, warehousing and distribution.”

Pacific National CEO Dean Dalla Valle said: “We are proud to be part of Parkes. When our logistics terminal is completed later this year, it will support 100 skilled jobs and allow 1,800m freight trains to haul doublestacked containers between Parkes and Perth.”