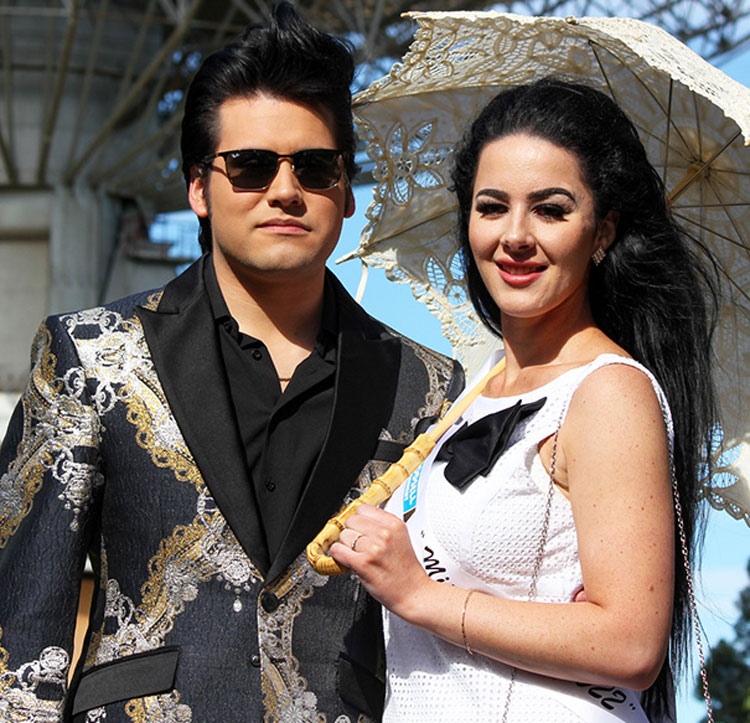 Elvis and Priscilla… Feature artist Taylor Rodriguez with Ashleigh Smith at The Dish.

Ashleigh Smith has not only brought back the Miss Priscilla title to Parkes but she is the first winner to have won the title two times.

Born and bred in Parkes, Ashleigh first entered and won in 2015 when she was 19 years old.

She was persuaded by her partner to enter again this year, and with the help of her stylist and sister-in-law Kaylee Smith she shot to fame on Thursday night.

The 26-year-old beautician said growing up in Parkes she always went to the festival with her parents. “When I won the first time it was amazing and something so different. It was a great experience!”

She said entering for a second time was much easier as she knew where to stand, and what to do and to say.

She spent about four hours on her hair and make-up before the competition. “Getting my hair right was the hardest as you have to get the Priscilla look. It was a lot harder than expected.”

She also made sure to do some research on Priscilla by watching videos of her and reading up on her style. “I wanted to match the 1960s style, her hair, bag, shoes, the whole package. She is very elegant and I really love her vintage style. She is such a beautiful woman. I also love her make up back then. It was more minimal and natural.”

Ashleigh felt it was really important to recognise Priscilla’s role in Elvis’s life and that it was good to have the competition as part of the festival. She enjoyed seeing so many Priscillas at the Parkes Elvis Festival every year.

She hoped to meet a lot of people at the festival and in the community during her reign.